Thursday, May 18th, 2017 (a month before my birthday) I cut my 4 year old locs off. They were getting really long (bra length, for reference) I mean the length that you wish for when you start locs and if you ask me why, I can’t really pin point it. The surface answer would be that my life is in transition but I also did it because they were starting to get heavy and lint and dandruff filled. I tried all types of masks and Apple Cider Vinegar and still felt pretty self conscious about it.  I just had an overwhelming sense to do it. 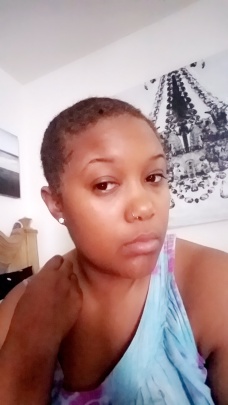 In total I cut it 3 times. Thursday was the initial cut. I cut the sides down to a 2 and kept the top a 3. I really liked the length but there were a couple of spots that were cut too low and I wanted to even them out. Then Saturday, I took it down to a 2 all over, put a slight part on the side and colored it. Sunday night cut it down to a 1 because I realized that I really wanted something I never had. I wanted to be courageous so I pulled out my clippers again. I’m aware most people would’ve waited until all the circumstances were right; lost weight, made sure they attended all of their really important meetings but not me. When the world is most likely thinking I should be celebrating my length, I’m figuring how I could get rid of it…not because I’m against length but when it’s time to let something go, it’s just time to let it go. I’m not gonna fake like it’s not intimidating, it is! I can’t hide behind my hair anymore, any rolls under my neck, skin issues or God forbid, chin hair, need to be dealt with asap but I see it as an opportunity to challenge myself for better self care and motivation to change things I would’ve typically would’ve let slide…now, it’s priority. I think it’s kinda refreshing when you are use to making everyone and everything else the priority. Now I know these things can slide through the cracks or imma wind up looking foolish out here in these streets.

When I started my locs, there were still women in the workplace who I knew had them but was nervous to take off their wigs. I don’t know if I feel like my work is done because they are now proudly sporting them but they are and I probably had nothing to do with the progression but I like to think I did. 🙂

Soooo…Am I my hair or naw? I honestly don’t know. I guess that would depend on who we are asking. Hair is an expression, an extension of you and it changes based on feeling, situation, boredom or damage. I could say that one or several was at play but to be honest I could’ve got my hair done and been fine with it. I could’ve possibly colored it so I would see the lint trapped in my locs but I wanted something different and I very much think that’s where I’m at in life…embracing the uncomfortable.

I had a conversation with Jen about this topic and she made a good point, ” People get used to your look and they think that you can never change it.” So no, I guess I am not my hair but then there’s times when I absolutely believe I am; like when the lint and dandruff were caught in it, I felt absolutely disgusting and even if no one could see it, I could. To those not close to it, they looked beautiful and they were in pictures but I had to live with it and the fly aways. The hair doesn’t define me…who I’m becoming does and the hair just mirrors that. With the hair gone, people don’t take me at face value anymore, they have to look deeper and I like that.