Let me start off by apologizing…this week my posting has been sparse at best.

First of all, excuse my appearance in this video. Secondly, I love you and I love this blog but I’ve been in love with the goal and not so much the process. I’ve been unmotivated because many times the process caught me off guard which has led me to this statement,  “I’ve been going through” to give you a sense of where I am without coming right out and saying why I’ve been going through but I said I would be transparent so this is why…

I’ve previously talked about this (read the post here to find out about the issue) and it’s happened again, not based off of my hair this time but articles of clothing and I have to admit, it threw me for a loop. It made me second guess myself. I started changing my clothes because I didn’t want to send the wrong message when there was nothing that I could see that was overly sexual or overly masculine about the outfits. I’ve even gone so far as to consider whether I should be in a position to influence anyone at all or just shut down. Don’t get me wrong, I think it’s healthy to really inspect yourself and your intentions but I’ve been finding myself still stuck even after I had.

Although, I have posted this week, it’s only twice in the last 5 days (this post makes the third) and that’s so not like me. I’ve wanted to do OOTDs but just wasn’t sure if I should. I even made a comment in my video saying, “This isn’t a fashion blog,” and it’s not, but it does include fashion because this blog is about taking steps to get better in all areas of life and fashion is a vehicle where creativity can run wild, it expresses exactly who you want to be and what influences you in a space in time. It’s really powerful when you stop and think about it. That’s really what I love about fashion but I’m not naive, it’s also a way you present yourself to a very judgemental world and whether you think or intend on sending one message, someone else might interpret it differently and that’s something we can’t control.

I spoke to someone I trust and they told me to really go to God about it. Now, I know you’re probably thinking, “Did you really need someone to tell you that?” No, I didn’t. I had already been going to God but was freaking out because I didn’t hear anything from Him but after her suggestion, I kneeled before God and really shared my heart with Him. I’ve asked Him to inspect me and I’m open to hear from Him. You may not feel like it’s a huge deal but to me it is…as a leader and influencer you have the power to shape people’s perspectives of the world. It’s a huge responsibility and I would never want to release anything that is detrimental especially something that I wasn’t even aware of. So in retrospect, I do appreciate and really respect them saying something to me about it and not just letting me go about my business doing, saying and projecting the wrong messages. If I have in anyway projected the wrong things across this platform or any other platform, please feel free to check me. I’d rather man check me before it has to go to God.

I love clothes, hair, makeup and the ability to express myself through my looks. It’s just crazy that I could possibly abort my future because of my love of fashion.

So far, I haven’t heard anything from God. Most people would throw the baby out with the bath water but I had to take it into serious consideration also because guys aren’t knocking down my door and I don’t know why. This conversation may have gone in one ear and right out the other had guys been hollerin at ole girl but that’s not the case. So I really had to consider “Is it because they think I’m gay?” I thought it was because God was preparing me…for whatever the next step is. I want to be married, I want a child…I want to be a wife to a man…a man that loves ME and everything that comes along with me. I don’t want to be a paper doll. I don’t want someone to manipulate my image or the image of God in me. If a man is interested, I’m not doing the relationship resumes, no persuading, I don’t want him to be attracted to me because I’m acting or dressing like anyone else cause for sure he’s gonna eventually see me and I can’t be anyone but me. I can’t apologize for being who I am.

I don’t know if anyone can relate to this but I told you guys I would be real…and peculiar. I’m both. I am certainly not perfect and when I get things wrong I don’t mind saying that I have but this one here, is really perplexing because this is the second time where this has come up. The conversation has never been am I gay because everyone knows that I’m not. The question is always am I distracting men due to my fashion choices whether it be clothing or hair choices. I can’t answer that. I don’t want a man that can’t see past whatever article of clothing is on my body or whatever hair I decide to rock. I know men a visual creatures and everyone has preferences but if short hair and combat boots causes him to be repealed from me, then I really don’t know what to do about that.

When it comes to my fashion sense, I’ve always known that I am an acquired taste, one day I might wear a jean jumpsuit that looks like a mechanic might wear and another day a tutu. From day to day, you really don’t know what you’re gonna get from me. The same can be said when it comes to my hair. This year alone, I’ve had bra length locs, have almost been bald twice, neon pink, rose gold, blonde, worn my natural hair color and even started wearing wigs. I’m truly unpredictable, a lot of times I don’t even know what I’m gonna wear until I get ready. But when and if God puts an end to that, I’ll be ready. As far as anything else, the only thing I can do is walk in love and respect and whenever necessary, inspect myself, my intentions and the messages in which I’m sending. After saying all of this, I’m led to believe if God hasn’t checked me, then maybe it’s about the process and this is just the price that must be paid. I could go deeper on this concept but this post is already way too long and it’s just an assumption but whatever God reveals I’ll make sure to let you all know. So I’ll leave you here and wish you Happy Holidays from my family to yours. 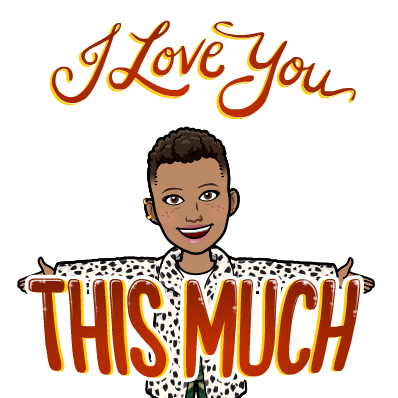 3 thoughts on “Future or Fashion?”