I’m unable to take the abstract idea behind this scripture, so it looks like we’ll have to go literal. I didn’t know it would get this deep…then again, I never do.

*This is not a man bashing post, this is exploring a theory that could be right or could be completely wrong. I don’t think it’s “bashing” per se, but I don’t want to make it into a male/female thing or a super feminist approach, we all should be celebrated and we need each other. I just simply want to explore the idea.

In the same way, the Spirit helps us in our weakness. We do not know what we ought to pray for, but the Spirit himself intercedes for us through wordless groans. -Romans 8:26

There are times when there are no words to explain to God or anyone else what you are feeling, what’s actually happening or even what you need to happen. I find comfort in speaking in my heavenly language because she speaks when we don’t know what we ought to pray for.

Yep, I said she. In Hebrew, Ruach which means spirit, wind and breath is feminine according to the Strong’s number 7307. Let’s look at some the characteristics of the Holy Spirit:

And that’s only some of the characteristics. I am not saying that a man cannot embody these elements but the nature of women is to nurture and of a helper which support these attributes. She is a helpmate to the Father which means she is a helpful companion or partner. Have you ever heard about the Godhead? It’s the Holy Trinity. The Father thinks it, the Son (Yeshua, Jesus) speaks it and the Holy Spirit carries it out.

The Work of the Holy Spirit

“But now I am going away to the one who sent me, and not one of you is asking where I am going.  Instead, you grieve because of what I’ve told you.  But in fact, it is best for you that I go away, because if I don’t, the Advocate[a] won’t come. If I do go away, then I will send him to you.  And when he comes, he will convict the world of its sin, and of God’s righteousness, and of the coming judgment. The world’s sin is that it refuses to believe in me.  Righteousness is available because I go to the Father, and you will see me no more. Judgment will come because the ruler of this world has already been judged. “There is so much more I want to tell you, but you can’t bear it now. When the Spirit of truth comes, he will guide you into all truth. He will not speak on his own but will tell you what he has heard. He will tell you about the future. He will bring me glory by telling you whatever he receives from me. All that belongs to the Father is mine; this is why I said, ‘The Spirit will tell you whatever he receives from me.’ John 16:5-15

Here Jesus is speaking. I know people have this idea of the “little woman” staying at home “in her place,” but if you look at Proverbs 31:10-31 (Virtuous Woman, below) you will find that she is quite the hustler. She’s knowledgeable and she goes hard for her family. She uses her strengths, like most animals do, to free up the man so that he can lead properly without burden. This is not to call her an animal but in nature you often see where the female is the hunter, not the male. He’s at the gates ruling and reigning, making decisions about what goes in and out the city and sharpening his wisdom. He isn’t burdened with worry when it comes to his household because she holds him down.

What’s even more interesting about this is that Proverbs 31:10-31 is an acrostic poem which is a poem or word puzzle that is placed in a composition in which certain letters in each line form a word or words. 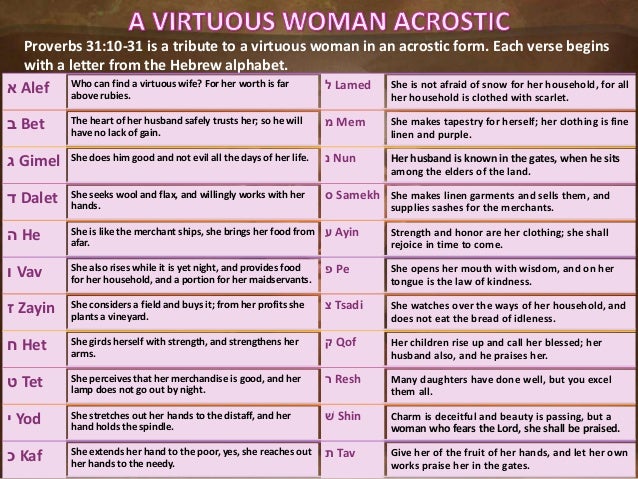 Here you can see it. Every stanza has a Hebrew letter associated with it. This post would be too long if I showed you how each letter correlates but what I do know is that it’s saying at a glance that this woman has everything from A to Z (Aleph to Tav).

Bottomline, God’s #1 goal is family. It’s always been about family for Him so it’s no surprise that the Godhead is a type of family that is so united that it’s one; a mother, father and son. Let’s take this a bit further, a lot of time mothers are so close to their children that they know what their child needs without words and will help express and even communicate the need even when the child can’t. For example, mothers know the different cries of their babies. They know when they are tired or hungry or something is wrong without the baby spelling it out. It’s a special kind of a bond.

Even if I have compelled you, you may still wonder then why does scripture itself often times refer to the Holy Spirit as ‘him’ in scripture? That’s explained in Genesis 1:1. It states:

In the beginning God created the heavens and the earth. The earth was formless and empty, and darkness covered the deep waters. And the Spirit of God was hovering over the surface of the waters. 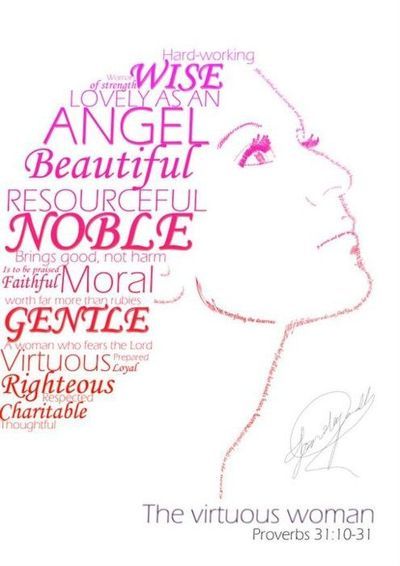 We all have creative power because we were created in the image of the Creator but what’s amazing about women is that they have the ability to transform things. You give us food, we create a meal. You give us a house, we create a home. You give us a seed, we create life. You get my drift…so when the Father gave her the earth that was formless and void, she created life. Hovering here also means to brood which is a verb and means to hatch, protect or incubate.

Even when Eve came into being she was still called Adam because she came from him (his rib) and there was still unity. Hence, she also called Adam and wasn’t called Eve until after the separation/sin came into the world and the judgement was given in Genesis 3:20. I honestly could go on and on about my theory with Adam and Eve, but imma chill for once.

Lastly, let’s take a look at the conception of Yeshua/Jesus. The virgin birth of Jesus is the belief that Jesus was conceived in the womb of his mother, Mary through the Holy Spirit without the assistance of a human father (Joseph) and born while Mary was still a virgin, hymen intact. However, the Bible states that “life is in the blood” in to Leviticus 17:11. Mary’s blood couldn’t have served as His life source which explains why He is both fully human and fully deity. It is my belief that Yeshua was conceived with Mary’s egg, manifested by the Holy Spirit and the Father provided his DNA, as you need both male and female genes to produce a zygote and looks as though Mary was supernaturally, artificially inseminated. Thereby, using Mary’s womb as an incubator for a earth suit to have the limitations and meet the qualifications of man to become the 2nd Adam and break the curse to restore us back to our original position we had before the fall.

Whatever is right, the point is these wordless groans or utterances assists us in expressing our deepest, incomprehensible feelings. There’s no right or wrong way to do it. I spoke in my heavenly language as an act of my will, praying, and just opening up my mouth and believing and allowing the Holy Spirit to fill it. As I began to do it more and more, it grew. It was almost like a muscle; at first, you feel weird but with practice it grows stronger.

I pray this was relevant to you and if you liked it, don’t be shy to subscribe, like or even comment. Again, this may or may not be right. I’m open to correction.