This weekend I was invited to celebrate The District Queen’s 1st Anniversary! Okay, yes, I’m super excited. This is my first blogging event that I was personally invited. Aside

from that I’m happy to celebrate their year of collaboration further killing the stereotype that women are unable to work together. These 4 fashion bloggers are killin it collectively and separately. The event is in DC on Saturday, 4-8pm and I don’t know what to wear.

Then, I work on Sunday from 8am-8pm. Yep, 12 hours for the Beltway BBQ and it looks like rain is in the forecast but it’s a rain or shine event so let’s hope the rain doesn’t steal the show. If it rains, it will still take place inside. The Beltway BBQ is an annual event that bring families together to enjoy a day of fun, food, vendors, car shows and so much more. They have demonstrations and everything. If you are in the DMV area, come check it out, Sunday at the Showplace Arena. Tickets are $10 and the event starts at 10:30 am, if I’m not mistaken.

This week, I give myself a C. I know, quite a jump right? Let me explain…I’VE BEEN WORKING OUT!!!! OMG!! Yes and one of those workouts I met the quota of my steps for the day. Of course, I’ve been keeping on top of my gratefulness journal. I haven’t been full out meditating but I have been stopping to take deep breaths randomly throughout the day. As far as good deeds go, I do that all the time so I stopped keeping track of it but then again I should be doing better with that. Lastly, I must admit my reading fell off this week.

Emotionally, I’ve just been facing myself a lot lately and I don’t know if I’m just being overly emotional due to my birthday and the anniversary of my Grandfathers’ deaths coming up, my finances or just because my period should be on or just because but I’ve been crying a lot, not because anything is wrong. It’s almost like I just need a release but I’m not sure what needs to be released. Whatever it is comes out in crying, which I guess can be considered cleansing.

The Crush and I have been talking a lot this week and it’s been really interesting. One night, while on the phone with him, I was talking to my mom in the background. She was showing my pictures from a date she had the previous night and I complimented her and he asked me about the last time I had gone on a date and I was super embarrassed. In an effort to better myself, I cut all of that outta my life to make sure I had healed from previous situations but I told him I didn’t know the last time because I hadn’t. I never thought to go on random dates but for whatever reason I didn’t express that to him. I just said “I don’t know.” I knew he wasn’t asking about whether I dated the people but just the last time I had gone out and I couldn’t tell him because it had literally been that long.

You probably don’t think it’s a reason to be embarrassed but I believe men want a woman that other men want but can’t have and I was worried that I just seemed too accessible, not in enough demand but I told the truth. Overall it wasn’t a big deal or at least it didn’t seem like it based on the conversation. There wasn’t an awkward moment, but it definitely stood out to me after we got off the phone and I really want to explain my answer in further detail but then I think it would definitely make it super awkward. Do you think I should just let it fly or explain?

I want to put everything into action at the same time. As always the 5 musts are my weekly priority and to continue to put out content I’m proud of.

It seems as though these are actions that I want to do and I’m able to do them. I just haven’t been able to do all 5 consistently at the same time. That will be next week’s challenge and every week after that.

Let me know how you thought I did and if you think I deserved a C, maybe I deserve lower or perhaps, higher. I’d love some feedback so let’s get a convo popin in the comments section. 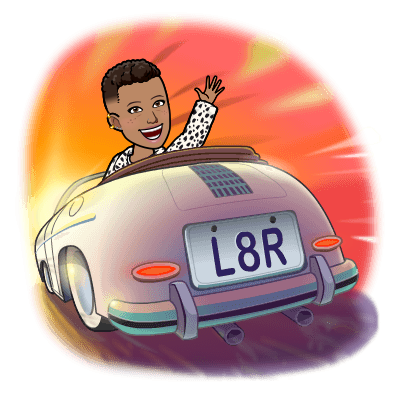